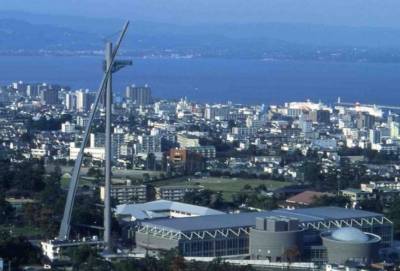 Beppu is a city famous for hot spring. It is a small city with no subways. The busiest area is near the Beppu JR Station. As a tourist relying on public transport to move around, the best accommodation should be hotels within walking distance from Beppu Station. As Beppu is famous for its hot spring (onsen), most hotels have in-house hot spring bath. I would recommend the following 3 hotels:

Beppu Kamenoi Hotel: This hotel was renovated in 2015 and rooms are bigger than many similar hotels. This hotel is close to Beppu JR Station. You can walk from the station by following the track towards Oita-shi direction. After walking past the Beppu Station Market, turn left and the hotel is 50 metre away. There is a Lawson convenient store across the road. The hotel has hot spring bath on the third floor and is complimentary for hotel guests. Rooms on high floor enjoy ocean view and mountain view. You may also see the trains arriving and departing from the Beppu Station.

Nishitetsu Resort Inn Beppu: This hotel is very new in Beppu but the rooms are very compact. The hotel is facing the ocean. So, you may either get a room with ocean view or city view. Hot spring bath is compliemntary for hotel guests.

Hotel New Tsuruta: This hotel is also facing the ocean. The hot spring bath is on the top floor with ocean view.

In terms of location. Beppu Kamenoi Hotel is a bit away from the city centre but is within walking distance. Both Nishitetsu Resort Inn Beppu and Hotel New Tsuruta are close to sea. All three hotels are about 5 minute walk from Beppu Station. In terms of cost, Beppu Kamenoi Hotel is the most competitive and offers various kinds of rooms from single-bed, all the way to rooms with 6 single-bed. Nishitetsu Resort Inn Beppu is the next competitive and Hotel New Tsuruta is more expensive but is grand and elegant compared to the other two hotels.

For shopping, the best location is the YouMe Town Beppu. You can find DAISO ¥100 Shop, GU, Uniqlo, supermarket and restaurants at YouMe. The shopping plaza is about 500 metre from Beppu Kamenoi Hotel, 300 metre from Nishitetsu Resort Inn Beppu and 200 metre from Hotel New Tsuruta.

Japan has many varieties of fruits all year. You can easily buy them in local fruit stores or supermarkets. I prefer shopping at fruit stores as the fruit is fresh and price is cheaper. Beppu is a small town and there aren’t many fruit stores around. The following 2 fruit stores are my preferences. For my trip in late September, the store has melons from Kumamoto for ¥680 each. It is very sweet and delicious. We bought a box of 5 before flying back to Hong Kong. The melon weights about 2 kilos each. It also has 6 mandarin for sales at ¥100 per pack.